April was a challenging month to say the least. Had to use much time and energy to deal with some issues. May was a much better month, but very busy on the positive side. 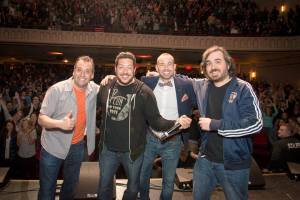 Ender’s Game ** 1/2 I found this movie fun but it lacked an indefinable something.

Dawn of the Planet of the Apes ** After all the hype surrounding this film, I was left disappointed. I found it vapid and cliche.

The momentum continues… I guess this is turning into a newsletter of my life. I hope it’s inspiring you to keep a list of your challenges and accomplishments throughout the year. I promise you that goal setting will change your life.

I researched using MailChimp for a mailing list. I read that mailing lists are the most underutilized marketing tool in a writer’s tool chest. I learned that to meet federal law I need to list my address in the signature of any emails I send out. This would mean getting a P.O box or mail drop if I want to ensure my privacy. I’m going to wait at this point, but I’ll keep it on the radar.

The terrible roads and potholes caused a sidewall bubble in one of Patty’s tires. Fortunately and unfortunately she only had the tires for six month. On the fortunately side, the tires were new enough that we only had to buy one new tire.

We had purchased MONEY Master the Game by Anthony Robbins in ebook and I also had a chance to sample the audio from the first chapter. I belive that’s the only chapter that AR reads. I also found a great summary of the key points that was left in an Amazon review. Here’s the key points that I put in my notes.

Naturally, I keep my finances close to my vest and don’t share much online. That doesn’t mean I’m not working on this category, though.

I revisited the Anthony Robbins Time of Your Life/RPM audio program.

Began reading The Winning Mind Set by Jim Brault and Kevin Seaman. Kevin Seaman was gracious enough to sign and inscribe a copy for me. My first impression is that it’s a very nice personal development workbook. Much of its contents are grounded in NLP and cognitive behavioral psychology. Great stuff! I think it will make a great refresher. And since both of the writers are also martial artists, I think I’ll enjoy many of their illustrative examples. I plan to work through each section and see where it takes me.

We came home to a small (what we believe to be a) screech owl perched on the light by our garage. The owl’s eyes were but slits in the daylight, but he still watched us as we made our way inside. Once we closed the door, he puffed his body out for warmth and went to sleep. As soon as the sun set he took flight to destinations unknown. I take the owl’s visit as a good omen of positive change to come. Here’s a photo of our unlikely visitor.

That’s about it for March. See you in April…hopefully sooner.

In an attempt to keep up the momentum with this blog, I’ve decided to give you another update. This one will list out what I worked on during the month of February. It hasn’t been bad for a short month.

Another month where I unfortunately didn’t make any seminars.

I tried Glenfiddich 12 this month. I find it has a smoother taste, less complex, more candied, more like a bourbon, and less mouth burn/heat. I like it best of all the whisky I’ve tried.

Not a big month for movies. Busy, busy, busy!

That’s it for February. March is already coming on full force and swinging for the rafters. More soon…

In an attempt to keep some sort of momentum going with this blog, I’ve decided to give you an update on what I’ve been working on during the month of January. It’s been a pretty good month. I’m hoping to make a couple videos soon that will show how I go about goal setting and planning my year. Until then, I give you this…

I’ll create an addendum if I think of anything else.

Each year I create a list of goals for every area in my life. Throughout the year I work on these goals, track my progress and my challenges. Then, to keep myself honest, I commit to posting a list of some of my top accomplishments and challenges, and some of my smaller ones as well.

This year I spent most of my time writing long fiction. I’ll expound on the consequences to my short fictions sales in that section. I finished the 2nd draft of an 90,000 word crime thriller, Year of the Demon, continued my Amazon experiment by  marketing Wolves of Vengeance, and began writing a ghost/suspense thriller and a science fiction thriller. I’m considering all my publishing options with Year of the Demon, and hope to be ready to forge ahead, on whatever that decision may be, by the end of 1st quarter 2015.

YEAR OF THE DEMON (Crime Thriller)

I returned to marketing Wolves of Vengeance after reallocating that time to complete Year of the Demon. I changed the fiction categories the book is listed in on Amazon, changed the books description, joined Kindle Unlimited and even ran a free promotion. I also received a few more nice reviews. All of these actions helped to return the book to the public eye and it began selling more and getting more borrows.

All the momentum I created during 2011 and 2012 culminated in 2013 being a banner year for  short fiction sales. Fortunately and unfortunately, everything purchased in 2013 was also published that same year. This left me with a lag in my momentum at a time when I wanted to spend more time on novels. I decided to put the majority of my time working on long fiction, but did squeeze in some time to write, rework, and submit stories for publication. I also ended up on the shortlist of one anthology, but won’t know if I have an acceptance until early next year. I’m competing with a group of highly talented writers who always bring their A-game. So, we will see what happens.

Reading is probably the most important thing any writer can do to improve their craft. The impulse to write usually comes from a love of reading. That’s certainly where mine came from. I don’t like to make a list of the books I read a year because, compared to some, my list would be pathetically small. I tend to read slowly. My pace has slowed considerably since I began writing because now I’m trying to read like a writer and absorb the nuances within the fiction, and learn how different writers aproach their craft. Still, I feel that the depth of the reading is as important and how much reading is accomplished.

Author Hank Schwaeble challenged me, and many other writers, to read some fiction classics this year. We were supposed to pick out some that we hadn’t read from Time Magazine’s All-Time 100 Novels.  I only got to one that I had picked out: The Spy Who Came In From The Cold by John Le Carre. I really enjoyed that book, and can see how it has influenced American thriller writers. I will read more on that list as time allows. 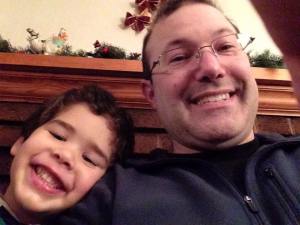 Last year I trained mostly solo and worked with some private students as I assessed the direction I wanted to take my own training. This year I made it a point to bring my training in a new direction.  I decided to add some Filipino Kali (stick and knife training) and Jeet Kune Do to my training. I had the opportunity to work with full and associate instructors of Guro Dan Innosanto and attended a seminar with legendary Sigung Taky Kimura. I trained with some old martial friends, and made some amazing new ones. Although I will continue to practice what I’ve learned in my previous arts, I now know what direction my training will go for at least the next five years. 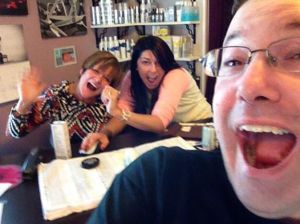 Last week I spent a fun filled weekend hanging out with creative people, attending readings and panels, and networking at AnthoCon in Portsmouth New Hampshire.

Here I am reading a portion of my story “The Interloper,” which appears in the annual AnthoCon anthology-Anthology: Year Two: Inner Demons Out.

“From the minds of guests of ANTHOLOGY (AnthoCon), Northern New England’s only Multi Genre Literature and Arts Convention, comes a compendium of imaginative prose, poetry, and arts.” 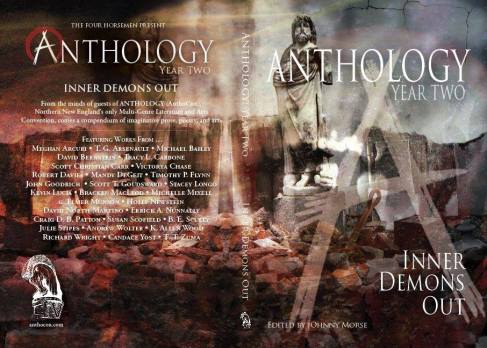 I’m very pleased to announce that my story “Phantom Chasers” is included in the FROM BEYOND THE GRAVE anthology.
From Grinning Skull Press:

FROM BEYOND THE GRAVE has been published and is available in ebook format only at the moment from Amazon.com.
http://www.amazon.com/From-Beyond-the-Grave-ebook/dp/B00BR0P8O0/ref=sr_1_1?s=digital-text&ie=UTF8&qid=1363013075&sr=1-1&keywords=from+beyond+the+grave
The authors included in this anthology are:
Brent Abell
Gordon Anthony Bean
Rose Blackthorn
Tim J. Finn
Scott M. Goriscak
Marianne Halbert
Jeffrey Kosh
Lisamarie Lamb
Mark Leslie & Carol Weekes
Edward J. McFadden III
Adam Millard
David North-Martino
Jeffrey C. Pettengill
Nelson W. Pyles
Michael Thomas-Knight
Robert W. Walker
Cynthia Ward
Jay Wilburn
Jennifer Word
Description:
For some, death is not the end. There are those who are doomed to walk the earth for all eternity, those who are trapped between one plain of existence and the next, those who, for whatever reason, cannot or will not let go of the lives they left behind. These are the vengeful spirits, the tortured souls, the ghosts that haunt our realm. Welcome to FROM BEYOND THE GRAVE, a collection of 19 original ghost stories.

I really liked this anthology. It stared off a little slow but when it picked up, boy did it pick up. As soon as I got to “Remaindered” by Lee Goldberg it started chugging along, full speed ahead. This is a professionally written, polished, and edited e-book by writers who are at the top of their field. You really can’t go wrong by picking this up, especially for the price. It has a little something for everyone.

Here are some of my favorites in the order they appear:

“Remaindered” by Lee Goldberg: As I already mentioned, this is a great story. If you like humor with your murder and mayhem, you’ll like this one.

“Fire in the Sky” by Joel Goldman: this is a very nice period piece that’s flawlessly written. You get much of the same richness you’d find in a novel in this short story.

“The Baby Store” by Ed Gorman: think of the movie GATTICA, only darker. Gorman likes to punch you in the gut and leave you down for the count.

“The Chirashi Covenant” by Naomi Harahara: THE JOY LUCK CLUB meets THE SILENCE OF THE LAMBS. Need I say more?

“El Valiente en el Infierno” by Paul Levine: this could have been a very politically charged story but Levine manages to humanize both sides and offers us a lot to think about. Fantastic!

“A Handful of Dust” by Harry Shannon: Shannon shows just how close the line is between noir and horror—then he crosses it. I loved it!

Anyway, I think you get the picture. I highly recommend this anthology. Go on and read it and find your own favorites.

Get it at Amazon

At it at Barnes & Noble

I am pleased to announce that my short story “The Language of Ice” is scheduled to appear in Phoenix Sullivan’s upcoming anthology Extinct Doesn’t Mean Forever. The anthology is slated for a spring release. You’ll be able to find it wherever fine e-books are sold.  I just signed the contract and I am very excited! : )