When I returned to writing fiction, the first thing I did was pull out the manuscript for Violent Fall and give it a reread. I liked it, but the story was too long for a “beginning” writer to get published and the story itself was incomplete.

Incomplete as a manuscript. I had the ending sketched out in my mind for years.

One thing I forgot to mention last time was that in 1996 I had just watched the movie Titanic. In that film, as the story unfolds, fictional characters Rose and Jack brings us on a tour of the whole ship from top to bottom.

I wanted to do the same thing with Violent Fall. My central character Irina Kira would bring the reader through most of the Audallis sphere from the city of New Boston East to the forest and farmland at the top of the biosphere where she would have a “violent fall” returning to where she started in the narrative. The lower portions, the bowels if you will, remained mainly unexplored and only hinted at in various drafts.

As I reimagined the story, I also changed the title. I had come across Somatotypes; the ectomorph, the endomorph, and the highly muscular mesomorph.  Somehow I put Mesomorphic with woman and a new title was born: The Mesomorphic Woman. I thought the title sounded like a science fiction story. I worked at erasing subplots, cutting to the heart of the narrative.

When I finished the new draft, I put it away for a while and worked on other projects. After a second draft, I asked my wife to proofread. Then I began the submission process.

Back in 2000, most magazines, especially the science fiction magazines (the old SF writers had a distrust for technology), required the old method of submission. This meant I had to print out a copy of the manuscript (after putting it in proper manuscript format) along with a cover letter,  clipping a SASE to the package, placing it an 8×10 envelope, and then driving to the post office to send it off.  Then I would wait a week and run to the mailbox every day for months while awaiting a reply.

Responses came. They were all rejections. One prominent SF mag complimented me on my world-building skills but they didn’t like the story. Eventually, almost everyone began to use email for submissions, the years had gone by without a sale, but another prominent small press SF magazine said the whole editorial staff loved it but had decided not to purchase my story. And so it went over the years. I had some anecdotal evidence that The Mesomorphic Woman was a good story. A tell-it-like-it-is receptionist, who was also a frequent reader where I worked, read it and identified with my major character Irina Kira. Despite positive feedback, I wasn’t able to sell the manuscript.

It wasn’t until six years later in 2006 when my short fiction began to sell. Yet, for the life of me, I couldn’t figure out why The Mesomorphic Woman wouldn’t sell. I got better at my craft and over the years tweaked the story, tweaked the language, hoping to make the manuscript salable.

I finally decided I had to put the manuscript away. I could write new stories in the time it took to polish old stories that weren’t selling. I abandoned The Mesomorphic Woman, consoling myself knowing that I might include it in a future short story collection.

Later, with the manuscript secured in my virtual trunk (my hard drive) an open call for submissions for a new anthology market caught my attention. They were looking for stories just like The Mesomorphic Woman. Was it worth resurrecting the manuscript one last time? I figured I’d give the damn thing one final edit and send it out, but not without some trepidation.

I’ll talk about this more next time.

Having decided my next story would be a dystopian short that drew inspiration from Cyberpunk and Steampunk, I envisioned a biosphere orbiting Venus, a once utopian society that had succumbed to decadence and decay.

A fad on the space station/biosphere Audallis had the citizens dressing and speaking as if they lived in the Roaring Twenties and early 1930s.

Yet, with a muscle-bound heroin, I chose to draw from the subgenre of feminist SF.

Recently, I had an industry insider incredulous at the fact that I had a story included in a feminist publication, and not just included, included as the lead story! How did that happen, she inquired? You’ll have to wait to at least part III to find out that piece of trivia. Oh yeah, you’re in for the long haul. Haha!

For many years, I’ve tried to stay away from politics. The old saying is you should never discuss politics or religion in polite company. And my politics have changed over the years.

While earning my original undergraduate degree (an associate’s, later, I earned my bachelor’s) I took gender issues classes, women’s lit, and psychology of women. My girlfriend at the time (now my wife) had a phase where she was reading the current feminist books. I studied them and referenced them for my papers. The professors loved me, as you could well imagine.

I infused the narrative with what I had read during my college days.

I never completed the initial draft of the story. Finding myself 8,000 words deep, and with my day career taking off, and eating up much of my time, I decided I had completed my initial goal of racking up my first rejection letters. I felt oddly satisfied.

I’d written half a dozen short stories, sent them to market, and received positive responses for my efforts. Had I made a sale? No. But I was sure if I continued on I would. I was right, but back then it was easier to give up than face failure or even success. Maybe success seemed scarier. I had built up the story in my mind and trusted it would make me as a writer. It seems funny now but part of me felt that if I finished that story, publishing would welcome me with open arms and Hollywood would pay through the nose for a movie adaption. It was a great fantasy.

A couple years went by. Long workdays as a security manager monopolized my time. Business writing replaced creative work. Then I was promoted into human resources in the same company, and a normal nine to five schedule left me with lots of extra hours to fill. I could finally sleep nights without worrying about a pager going off. Like Neil Diamond, “I felt an emptiness deep inside.” I couldn’t remember what I had liked to do outside of the day job.

At first, I returned to martial arts. Even though I have always loved martial arts, training didn’t quell my emptiness.

I discovered the horror community online, a group of writers who had gone underground after the 1980’s horror fiction implosion.

Reading through the message board they frequented, I decided it was high time I returned to writing. I dusted off my old manuscript, the science fiction story with the working title, Violent Fall, and felt complete once again.

Finishing the story sent me on a very long journey to see it published.

We’ll talk about how that happened next time.

In 2012 and 2013 the floodgates opened with numerous story sales and publications. I even published my first novella, an ebook. Then I lost momentum. Everything from that time is a scramble in my brain. I had a death in the family that threw me for a loop, multiple projects, and high hopes.

It began with the sale of a short story originally envisioned and started in 1996, then finished and rewritten in the year 2000. I never imagined how long it’d take to sell that story. Yes, 12 years to sell it and 13 years to see it in publication, if we only count from the year of the rewrite.

I’m sometimes asked when you should give up on a story. It’s a hard question to answer. Some stories sell quickly, some take longer, and some never sell. In this business perseverance is everything.

The origin of the story begins much earlier than even 1996 though. The first inkling arrived when I was in high school. Back then, a new game show appeared on the air later at night, at least in my market. The program, American Gladiators, pitted superhero type muscle men and women against your run of the mill athletic but common Joe and Janes.

The contrast reminded me of Joe Buscemma’s depiction of the superhero vs. the ordinary person in How to Draw Comics the Marvel Way. 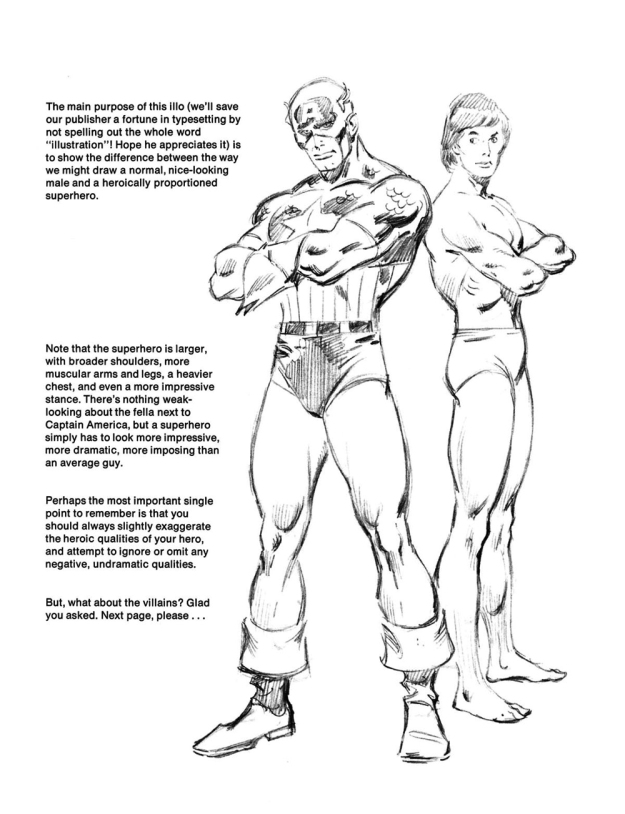 While watching the program, an idea hatched. Raye Hollitt (Skin Deep), a female bodybuilder who used the stage name Zap, inspired me.

Wouldn’t it be interesting to cast her in an action film like the ones in which  Sylvester Stallone or Arnold Schwarzenegger starred? I decided the world was not ready for that idea, and besides, I didn’t know how to write or submit a screenplay, anyway.

Around 1996, with the 1980s horror fiction implosion far behind me, I returned to reading Science Fiction. I picked up copies of science fiction magazines, read Neuromancer,  and caught up on some 80’s SF I had missed. 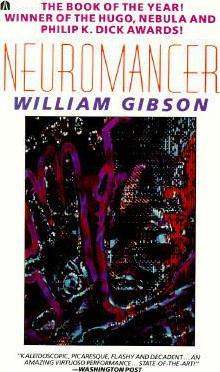 While perusing an issue of Science Fiction Age, I read a steampunk story and used it as the model for the tone of my next manuscript. Continuing to take my cue from that story, I mirrored not only the mood, but the female lead. Unfortunately, after looking through a pile of back issues, I haven’t been able to identify the story that inspired me. 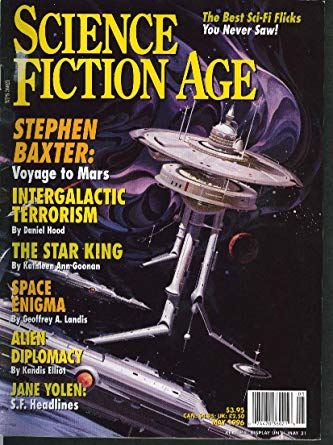 As I wrote, the muscular female idea reemerged and Irina Kira was born. I remember reading or thinking Kira was a Russian name that meant Strong woman. Although, Kira, from my research for this post, means “leader of the people.”

I decided a Russian first name, Irena, which means peace, matched one theme of the story. Leading the people into peace seems à propos, but what happens after the end of the story is up to your interpretation.

I envisioned a muscular woman living in what had once been a utopian society within a biosphere orbiting Venus. A popular self-help book of the time, Men are from Mars, Women are from Venus, inspired me to use Venus as the location for the orbiting biosphere space station.

Looking for a name for the biosphere/space station, I dreamed up the Audallis Sphere. It sounded like something out of a SF story.

I came up with a history of the biosphere and the science behind Audallis’ artificial gravity, neither made the completed manuscript.

Then I chose to include a controversial idea that would forever change the direction of the manuscript.

We’ll talk about that next time.